John and I finally got started on our collaboration. I think it has been a few days since we last met up. Nevertheless, we somehow finished up our halves yesterday. 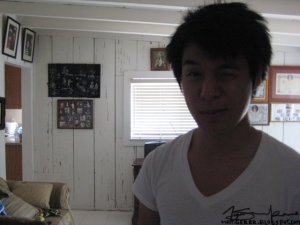 This is a sneak peek at our Michael Jackson tribute. I’m doing the Thriller one. I wasn’t satisfied with it, but I usually am never satisfied with my work. It makes me push myself every time. To the project, I would explain how it is suppose to work, but I don’t want to give it all away. 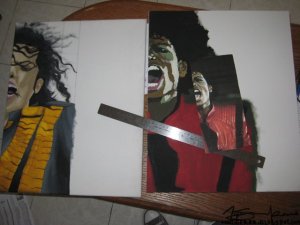 Here is the man at work. We had to meet up to get some measurements correct. One thing I realized, we work quite differently. Even down to how we split the reference image. He split his into squares. I guess that is the way it is suppose to be done. I tend to not go by the book. I just folded my paper in half then kept on folding until I got what I wanted. It’s all good though. I tend to take more from working with someone different. I know John took a few techniques from me too. He is even starting to do some pen work. Nice. 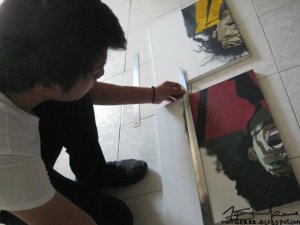 While he worked, I looked at his supplies. Not that much different from mine. He sure had a lot of brushes though.

At work. My ankles started to give after a while. I’m getting too old. I asked John if he was working on the ground the whole time, and he didn’t. He worked on a chair first. Then I think he had his painting on a chair too. Then it was uncomfortable so he put the painting on the ground and worked on his knees. Seems more uncomfortable, but I guess not.

Well that’s a peek into one of my projects. We are aiming to be finished by Thursday. Fingers crossed.