I’ve been based in the OC for quite some time now. I live here so I work here. However, LA has it’s own thing going on and I like. It was the 1st Jtown Summer Session ever at the Higashi Honganji Buddhist Temple this past Sunday. 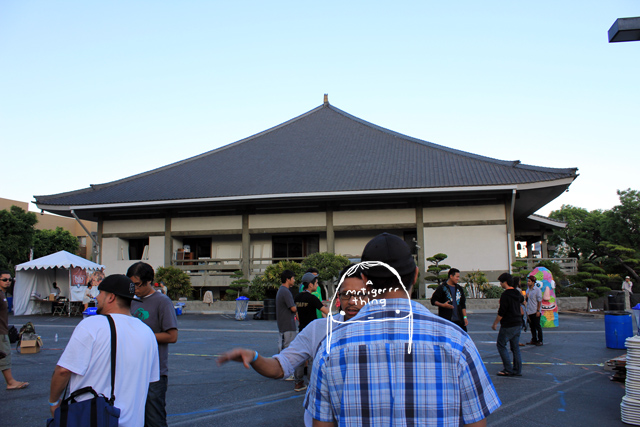 I was a volunteer at the arts and crafts table, which is a step away from where I would usually vend. 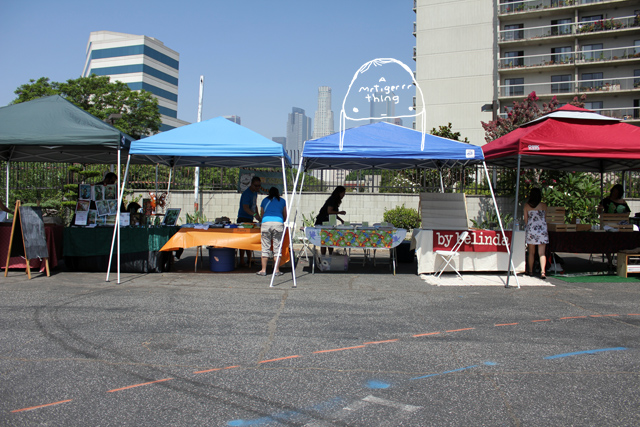 I do miss it. Setting up, talking to people, receiving reactions to your work. The whole shabam. It’s fine though. I’m with bybelinda. =] 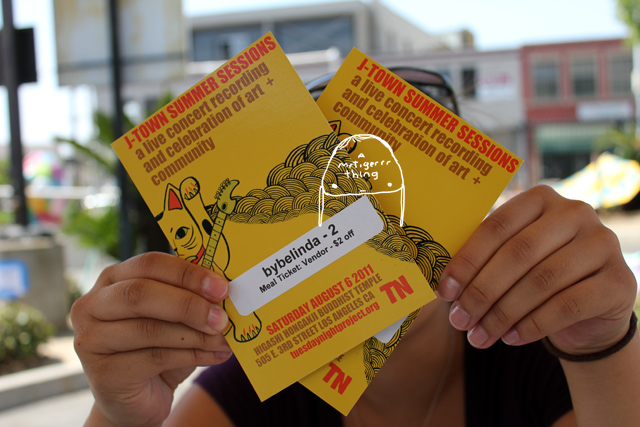 I definitely feel you have to make your own entertainment at these kinds of events. There is a lot of down time. I declared myself visor leader. Sometimes people need to know who to ask for help. 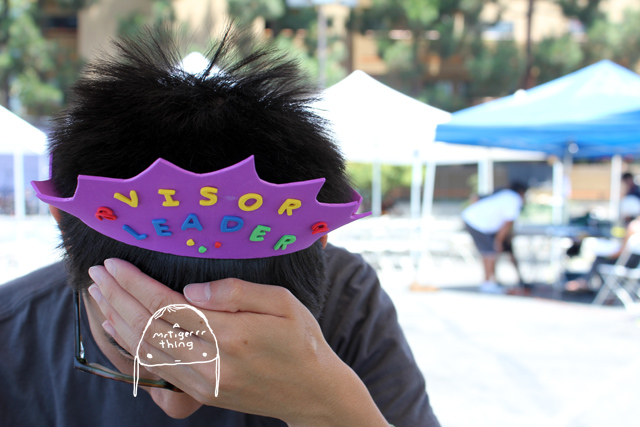 Some interesting people came by. This is Giovanni. He was performing with Mista Cookie Jar. I heard them during sound check and was trying to freestyle at my table. I know how to entertain myself. 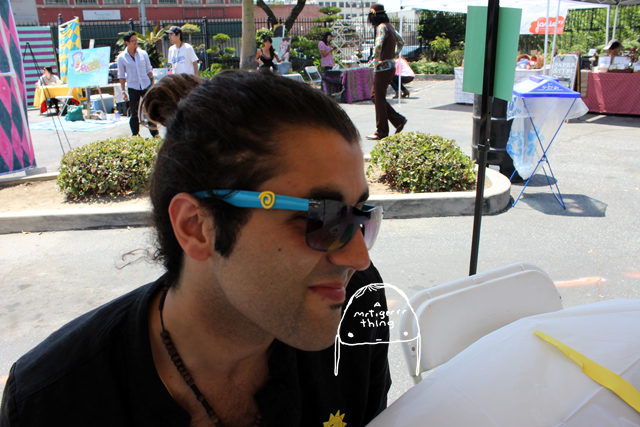 Here’s the Ukulady. After I finished helping her with her visor, she asked me for a picture. I asked for one too. =] 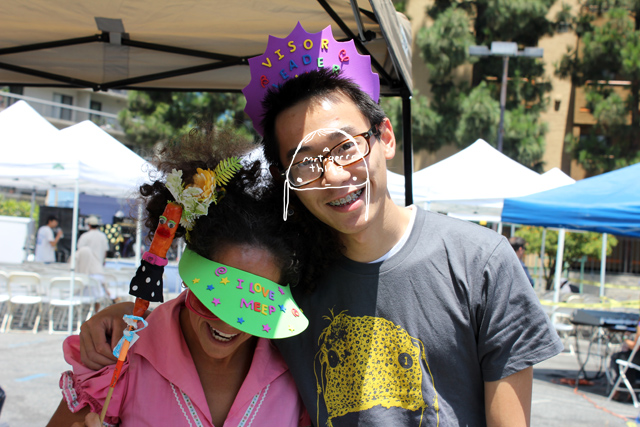 I like to walk around talking to people when I get restless. Here’s a visor friend! I made that for her. 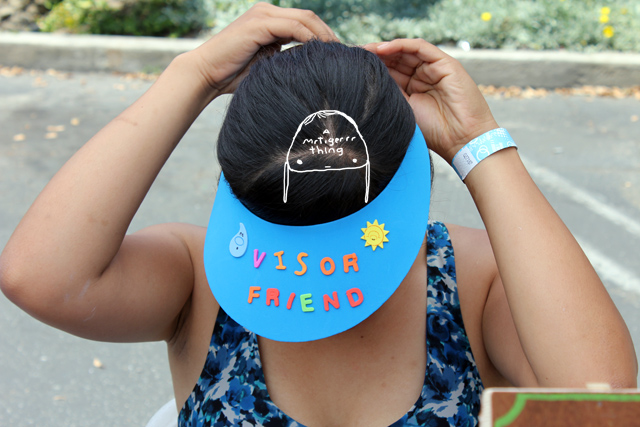 It’s JanieXY. We met during a show in Long Beach. I think it was a year ago. They still remember me! I’m actually quite surprise to see them again. Pleasant surprise though. =] Interesting fact. See that man there? He is the one that names the toys. Names like Billy and Wilbur. 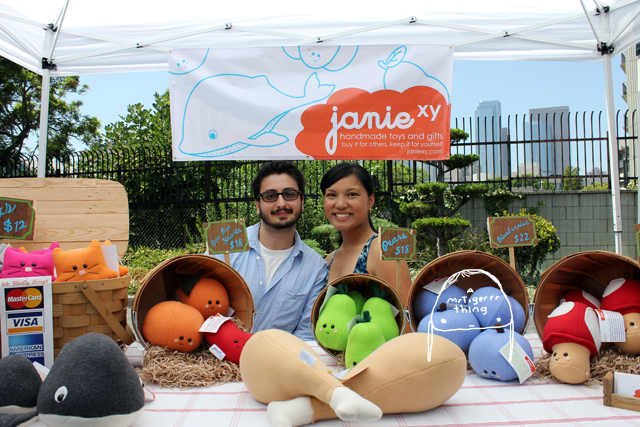 This is Karen G. She sells cookies. I also helped with that visor. I cut it up so it looked like a crown. 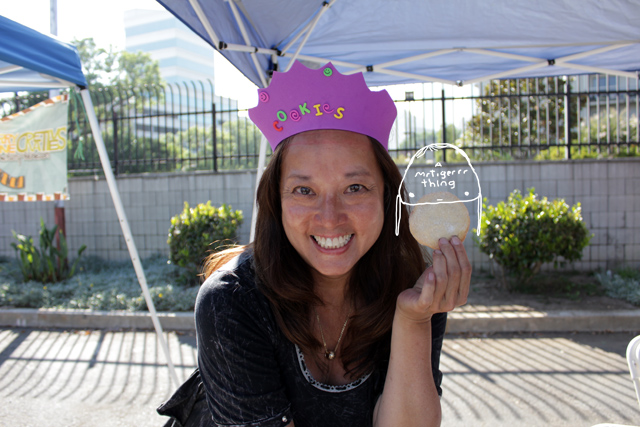 This is Paper & Type. Well Victoria, on the left, is Paper & Type. She’s the one who mentioned that my crown reminded her of the statue of liberty. Because of at, I had a large clothes pin with a red fire cut out just so I looked more like it. I’m so funny. 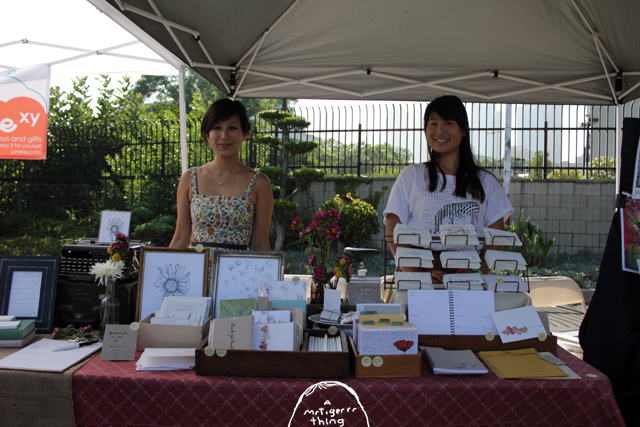 Now off to the live art section. I honestly didn’t know there was such a thing as the live art circuit. See those holes? They were made by burning a hole. 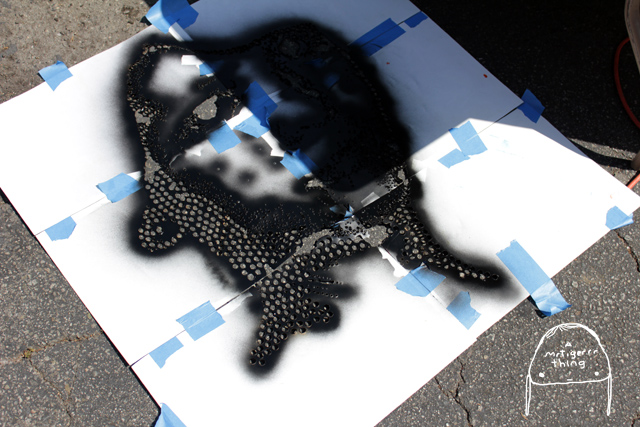 He was using some kind of pen. I asked if any of his work ever caught on fire, but it hasn’t. I also asked him what his work means. He replied it is what it is. I like. 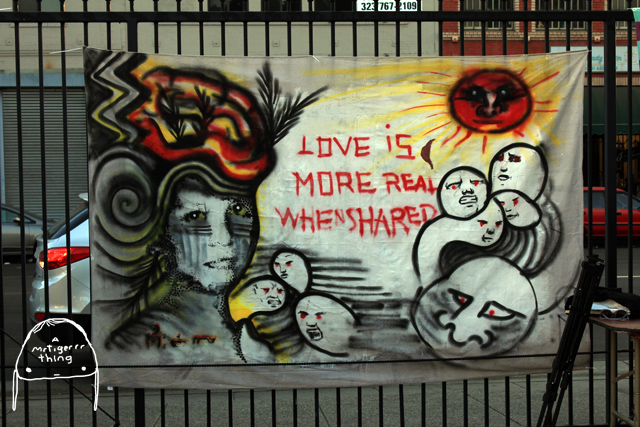 This is the most complex thing I seen the whole day. It’s by Alex Chiu. 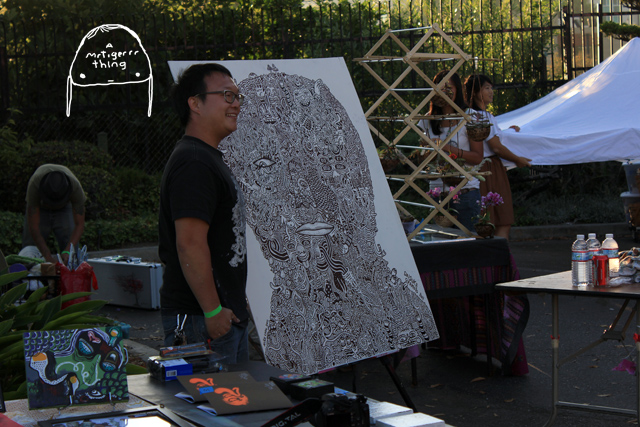 This one is by A’misa Chiu. She is the coordinator for the live art section. I talked to her about joining it and she’s down to let me in! Catch me in LA sometimes you guys! 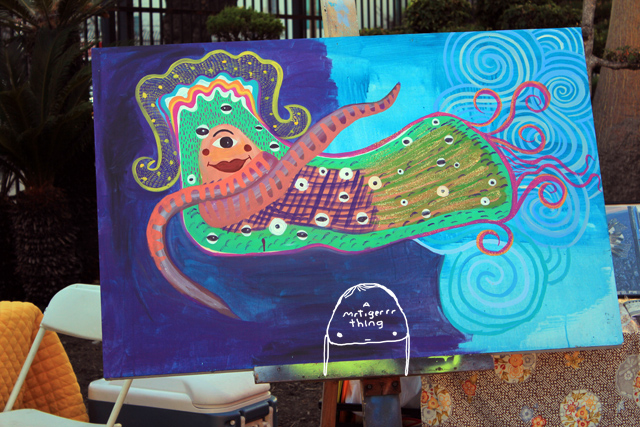 The longer I spent in this space, the more I liked it. It’s surrounded by so much talent that I must be a part of it. Dawen anyone? He’s the man who sang the infamous “Friday” song in Chinese. 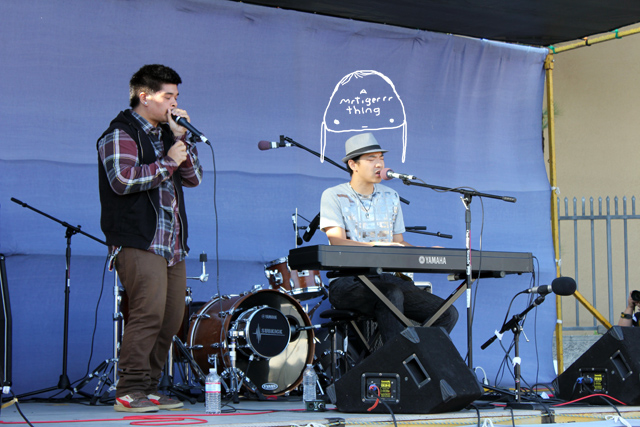 Jane Lui! She’s so cool. In these upcoming months, she’s going to be performing in norcal, socal, Europe, NYC, etc. 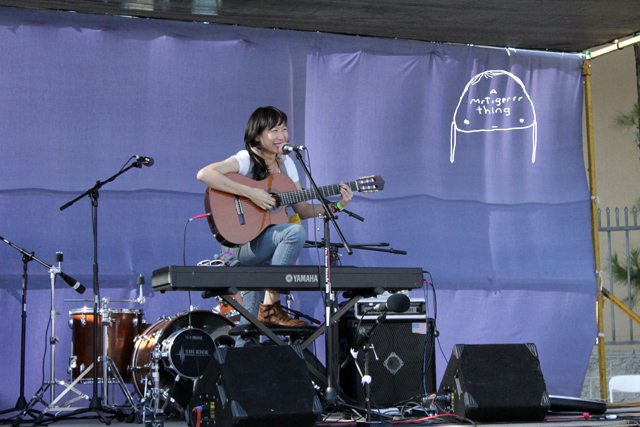 I had to get a picture with her. She even complimented my nonapus tee before I even introduced myself. =] 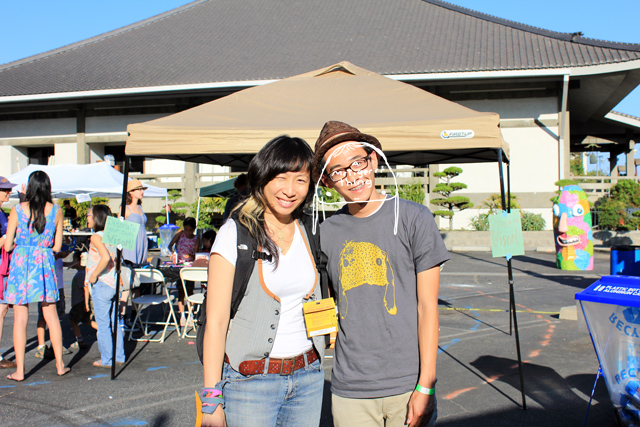 This is Connie Lim. I got a picture of her as well. 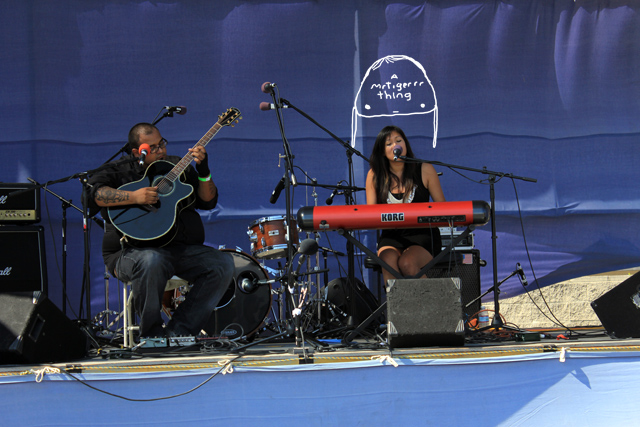 She even stopped by the visor booth for a bit to decorate her own visor. That man next to her is John Reinert. 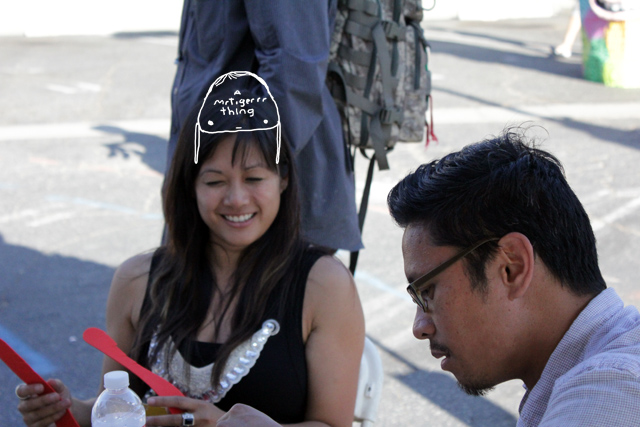 He let me play with his 7D for a bit. I remember meeting him a year ago at a long beach show as well. It was at Patchwork. We talked for a bit, but we got a better chance at getting to know each other this time. I checked out his vimeo. I watched “Left on Lockett Lane” which I recommend. It’s a documentary about an adopted Filipino in a Caucasian family who eventually reconnects with his lost heritage. 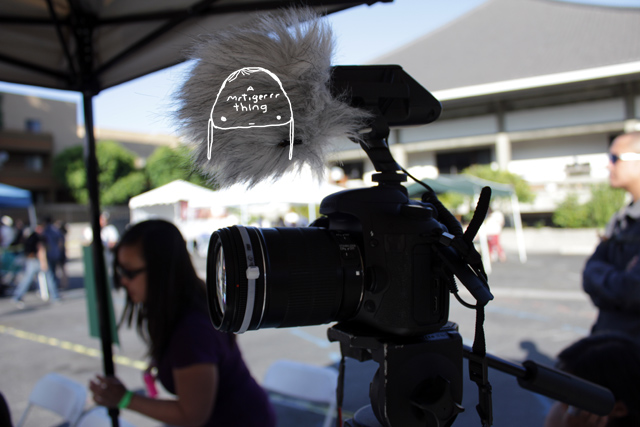 Keiko Agena was the host. You might have seen her on Gilmore Girls. I was going to take a picture with her, but she was a busy person. Gosh darn it. 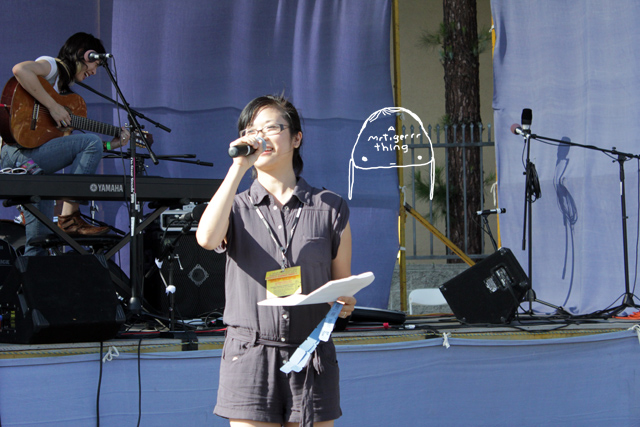 This guy was being approached by lots of different people. I figured he was famous, so I snapped a picture of him. 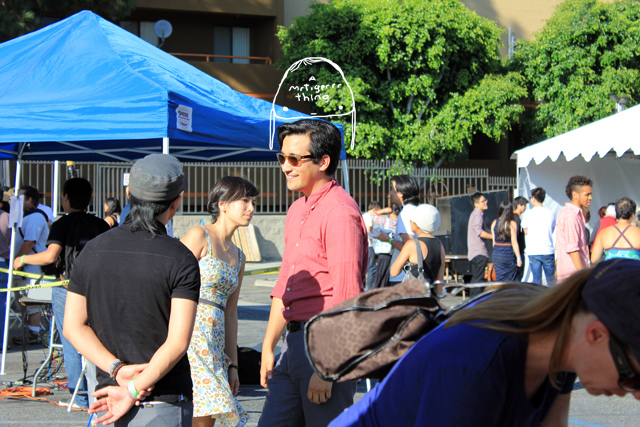 I was right! These guys are Andrew Figueroa Chiang and the Blazing Rays of the Sun. 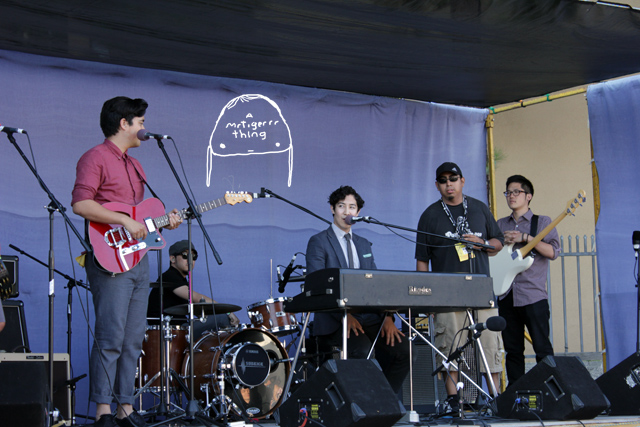 They are good. The singer had a raffle drawing. Everyone did, but for his, he had the prize be a live song made up for the winner on the spot. He mixed in roboto and golf and 45 billion into it. I wish I could sing. It would make all my thoughts sound so much better. 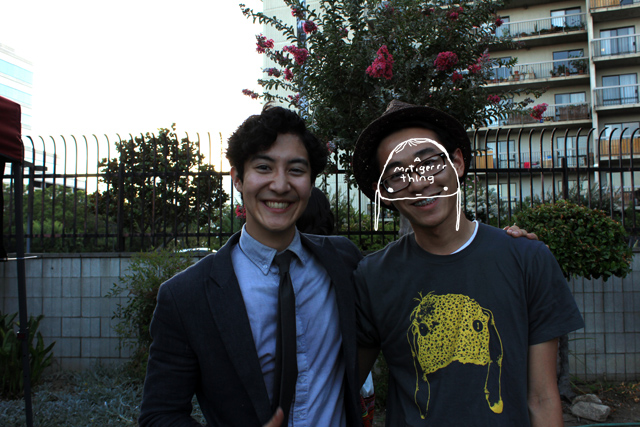 Every time I come home from an event, I have back pockets full of flyers, business cards, and free stuff. I like to go through them, sort them, and look at everyone’s pages. 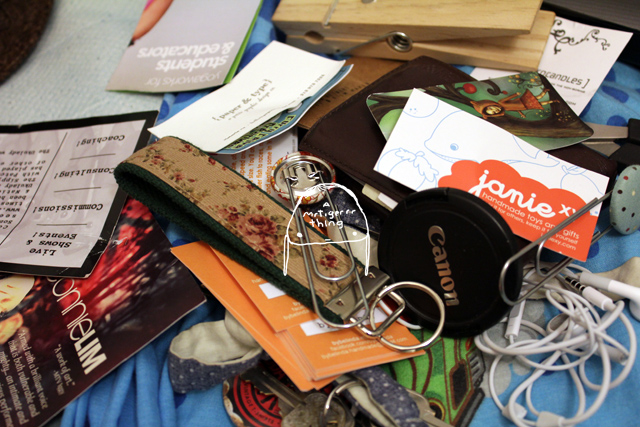 Last, but not least is bybelinda. She has extended countless opportunities to me and I’m quite sad to hear she isn’t go to vend anymore. I understand though. It’s a lot of tough work. I was able to get some of her work after she cleaned up. Check her out before there is no more. I’m sure her cards will make you smile. 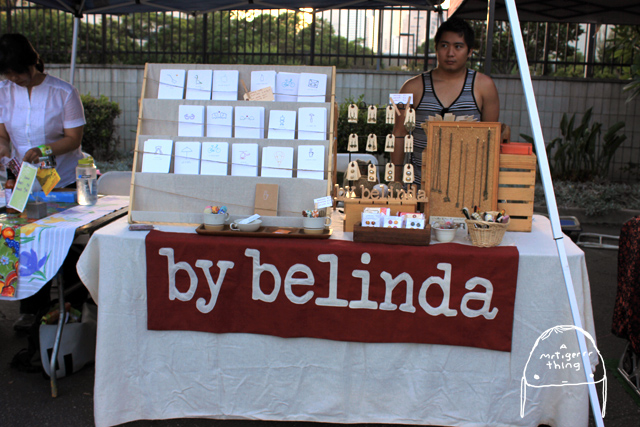 Well LA, I like you. I like being surrounded by people who are like minded. Everyone here is so talented that it makes you feel more comfortable expressing your own talents. It’s been a while since I was involved in something, but it’s nice. It gives a sense of purpose. I realized when you become involved, you usually see the same people. I seen it in college. I seen it here. It is it’s own community, but the community is worth being in. I’ll see you some more LA.
Sincerely,
mrtigerrr